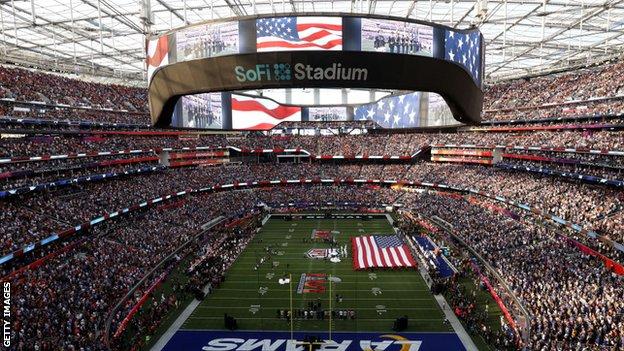 LA Rams' SoFi Stadium, which hosted this year's Super Bowl, is the world’s most expensive stadium at more than $5 billion

The first 48-team World Cup will be held in 16 venues across 11 US cities, along with three venues in Mexico and two in Canada.

It marks the first time three countries have hosted the tournament.

The Azteca Stadium will also be the first venue to feature in three separate World Cups.

Los Angeles' Pasadena Rose Bowl, which hosted the 1994 World Cup final, has not been included.

Another notable absence was the US capital, Washington DC, which was one of nine host cities the last time the US staged the tournament.

The joint bid from Washington DC and Baltimore, Maryland, was one of six that were not chosen alongside Cincinnati, Denver, Nashville, Orlando and Edmonton.

"It's been an incredibly competitive process. All the cities have been amazing. This was a very, very difficult choice," said Fifa's chief competitions and events officer Colin Smith.

"You can't imagine a World Cup coming to the US and the capital city not taking a major a role as well."

All 11 stadiums in the US are home to NFL teams and include the New York Giants' MetLife Stadium and $5bn SoFi Stadium that hosted this year's Super Bowl.

Both venues are contenders to host the 2026 final, but Fifa president Gianni Infantino said world football's governing body will take their time with a decision.

"There are still some discussions to go on and we'll certainly choose the best cities for the openings and the finals," he told Fox Television.

"But every match will be a final at this World Cup."

This news item was provided by the BBC Sport - Football website - the original link is: https://www.bbc.co.uk/sport/football/61835686?at_medium=RSS&at_campaign=KARANGA