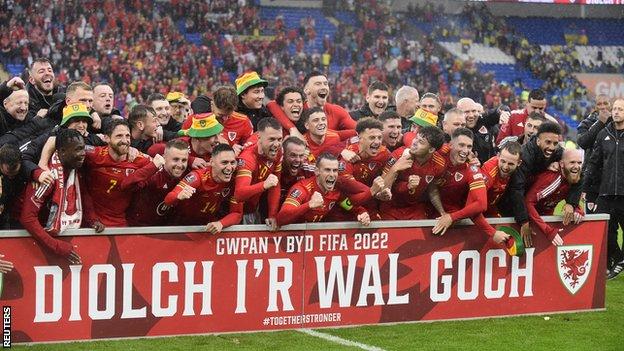 Wales players celebrate after qualifying for the World Cup

The talismanic forward made the difference when his 34th-minute free-kick was headed into his own net by Ukraine captain Andriy Yarmolenko.

"It's the greatest result in history for Welsh football," Bale told Sky Sports.

"It means everything. It's what dreams are made of. I'm speechless because I'm so happy.

"Words can't describe how we feel at the moment."

Wales will now head to Qatar in November, where they will face England, USA and Iran in Group B at the World Cup.

"It's difficult to put it into words," added Bale on BBC Radio Wales.

"It's what we've been working all our careers for and to do this for the fans, the nation, ourselves and our families is an incredible achievement - and it will be something that we will be forever proud of.

"It means everything. It is the last piece of the jigsaw that we all wanted and we're going to celebrate well tonight."

Keeper Wayne Hennessey made a string of fine saves and Wales manager Rob Page said on Sky Sports: "I'm so proud of the guys, they thoroughly deserved it.

"The one thing these boys were missing was a World Cup and now we've got there.

"These are the best supporters in world football, they helped us from the first minute.

"When you see what these guys do in training, I had full trust in them."

The other side of the coin was the end of Ukraine's fairytale, bidding to reach just the second World Cup finals in their history.

Their run had included beating Scotland at Hampden in the semi-final, giving much-needed cheer to a nation torn apart by war since Russia's invasion a little more than 100 days ago. 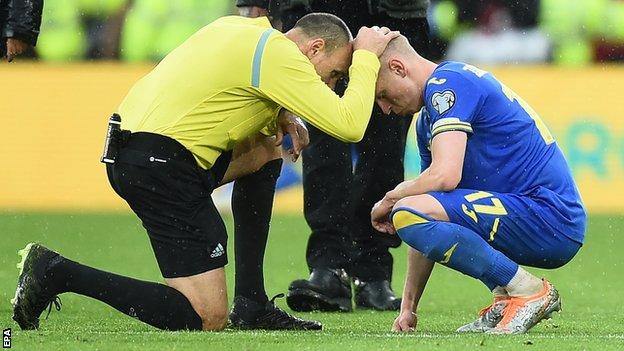 "I feel sorry for our fans, but I wish Wales all the best for the World Cup."

This news item was provided by the BBC Sport - Football website - the original link is: https://www.bbc.co.uk/sport/football/61698201?at_medium=RSS&at_campaign=KARANGA